We are delighted to announce our upcoming solo exhibition with the Polish-Romani artist Malgorzata Mirga-Tas, opening in spring 2023. In textile works, installations, paintings and sculptures, Mirga-Tas deals with antiziganist stereotypes and engages in building an affirmative and situated iconography of Roma communities from the perspective of a feminism of minority.

In portraying scenes from everyday life in Roma communities and settlements, Mirga-Tas challenges stereotypical depictions of Romani people, both in the past and present. She is especially recognised for her monumental textiles, sewn out of clothes from her family and members of her community. She creates colourful visual narratives that integrate references from art history, personal observations, Roma activism and historical symbols that fill Roma identity, history and community with a sense of pride. Several works tenderly portray the lives and everyday existence of Romani women in rich detail, highlighting the important role of women in the public and private spheres.

In 2011, Mirga-Tas created Poland’s first public monument honouring the Roma victims of the Holocaust during the Second World War, where nearly half a million Roma were killed by the Nazis. A few years later, the monument was vandalised by unknown perpetrators, and Mirga-Tas used the fragments of the sculpture to create a new sculptural work illustrating the mechanisms of racist violence.

Mirga-Tas participated in the Berlin Biennial in 2018 and 2022 she is the first Roma artist to represent Poland at the Venice Biennale. In the exhibition at Göteborgs Konsthall, Mirga-Tas will be showing existing and new works based on Swedish Roma history and experiences.

The exhibition is presented in collaboration with the Polish Institute in Stockholm.

In 2022, Mirga-Tas participates with the acclaimed exhibition Re-enchanting the World in the Polish pavilion at the Venice Biennale. Photo: Daniel Rumiancew. 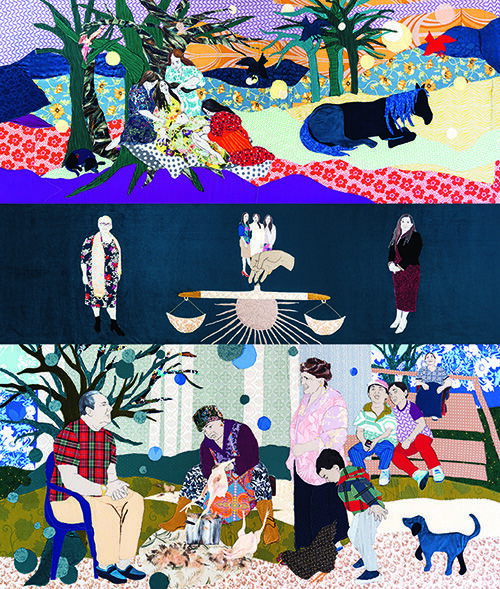